There are many different advantages of choosing to use a wooden snow fence. Snow fencing is traditionally used to prevent snow from drifting onto residential and commercial driveways, highways, walkways or even airport runways. Drifting snow can gather quickly and be both dangerous and costly to remove. Purchasing a wooden snow fence can greatly reduce the costs associated with maintaining property in the winter and drastically improve safety.
Another advantage of using a wooden snow fence is that they are easily installed and removed. This allows them to be used seasonally or temporarily to create safe walkways and paths. You can use our wooden snow fences during any season for construction fencing, to create a temporary wooden fenced walkway, for beach fencing, or many other uses.


The science behind snow fencing is quite simple. A decently constructed snow fence like ours will cause the snow to drift downwind of it. An eddy will form behind the fence whenever the wind passes over it, reducing the overall wind speed. Snow drifting on the winds past a snow fence will get caught in the eddies created by the fence, and as the air slows, it will drop some of the snow just beyond it. Eventually, large mounds of snow accumulate downwind of a snow fence.
If a wooden snow fence is located upwind of a road or runway, the snow collects around the fence and doesn't blow onto the road. Ideally, the fence should be set about 35 times its height from the road. 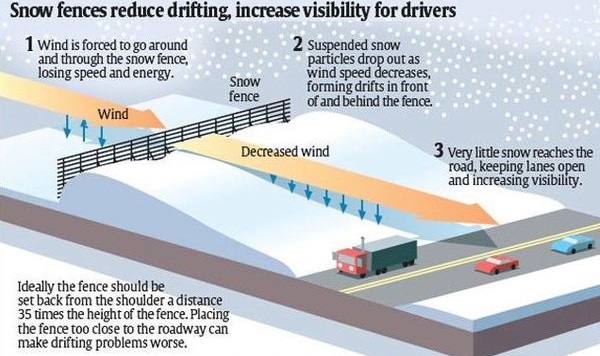